Tetralogy of Fallot (TOF) is a type of heart defect present at birth. Symptoms include episodes of bluish color to the skin. When affected babies cry or have a bowel movement, they may develop a “tet spell” where they turn very blue, have difficulty breathing, become limp, and occasionally lose consciousness. Other symptoms may include a heart murmur, finger clubbing, and easy tiring upon breastfeeding.

The cause is typically not known. Risk factors include a mother who uses alcohol, has diabetes, is over the age of 40, or gets rubella during pregnancy. It may also be associated with Down syndrome. Classically there are four defects:

TOF is typically treated by open heart surgery in the first year of life. The timing of surgery depends on the baby’s symptoms and size. The procedure involves increasing the size of the pulmonary valve and pulmonary arteries and repairing the ventricular septal defect. In babies who are too small a temporary surgery may be done with plans for a second surgery when the baby is bigger. Most people who are affected live to be adults. Long-term problems may include an irregular heart rate and pulmonary regurgitation.

TOF occurs in about 1 in 2,000 newborns. Males and females are affected equally. It is the most common complex congenital heart defect. It was initially described in 1671 by Niels Stensen. A further description was published in 1888 by the French physician Étienne-Louis Arthur Fallot, after whom it is named. The first surgical repair was carried out in 1954.

Tetralogy of Fallot results in low oxygenation of blood due to the mixing of oxygenated and deoxygenated blood in the left ventricle via the ventricular septal defect (VSD) and preferential flow of the mixed blood from both ventricles through the aorta because of the obstruction to flow through the pulmonary valve. This is known as a right-to-left shunt. The primary symptom is low blood oxygen saturation with or without cyanosis from birth or developing in the first year of life. If the baby is not cyanotic then it is sometimes referred to as a “pink tet”. Other symptoms include a heart murmur which may range from almost imperceptible to very loud, difficulty in feeding, failure to gain weight, retarded growth and physical development, dyspnea on exertion, clubbing of the fingers and toes, and polycythemia. The baby may turn blue breastfeeding or crying.

Children with tetralogy of Fallot may develop “ spells”. These are acute hypoxia spells, characterized by shortness of breath, cyanosis, agitation, and loss of consciousness. This may be initiated by any event leading to decreased oxygen saturation or that causes decreased systemic vascular resistance, which in turn leads to increased shunting through the ventricular septal defect.

Tet spells are characterized by a sudden, marked increase in cyanosis followed by syncope, and may result in hypoxic brain injury and death.

Older children will often squat during a tet spell. This increases systemic vascular resistance and allows for a temporary reversal of the shunt. It increases pressure on the left side of the heart, decreasing the right to left shunt thus decreasing the amount of deoxygenated blood entering the systemic circulation.

Its cause is thought to be due to environmental or genetic factors or a combination. It is associated with chromosome 22 deletions and DiGeorge syndrome.

Embryology studies show that it is a result of anterior malalignment of the aorticopulmonary septum, resulting in the clinical combination of a VSD, pulmonary stenosis, and an overriding aorta. Right ventricular hypertrophy develops progressively from resistance to blood flow through the right ventricular outflow tract. 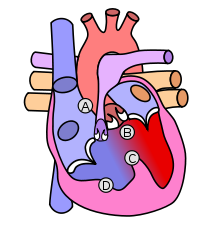 There is anatomic variation between the hearts of individuals with tetralogy of Fallot. Primarily, the degree of right ventricular outflow tract obstruction varies between patients and generally determines clinical symptoms and disease progression.

Presumably, this arises from an unequal growth of the aorticopulmonary septum. The aorta is too large, thus “overriding,” and this “steals” from the pulmonary artery, which is therefore stenosed. This then prevents ventricular wall closure, therefore VSD, and this increases the pressures on the right side, and so the R ventricle becomes bigger to handle the work.

In addition, tetralogy of Fallot may present with other anatomical anomalies, including:

Tetralogy of Fallot with pulmonary atresia ( ) is a severe variant in which there is ca obstruction (atresia) of the right ventricular outflow tract, causing an absence of the pulmonary trunk during embryonic development. In these individuals, blood shunts completely from the right ventricle to the left where it is pumped only through the aorta. The lungs are perfused via extensive collaterals from the systemic arteries, and sometimes also via the ductus arteriosus.

Congenital heart defects are now diagnosed with echocardiography, which is quick, involves no radiation, is very specific, and can be done prenatally.

Before more sophisticated techniques became available, x-ray was the definitive method of diagnosis. The abnormal “coeur-en-sabot” (boot-like) appearance of a heart with tetralogy of Fallot is classically visible via chest x-ray, although most infants with tetralogy may not show this finding. Absence of interstitial lung markings secondary to pulmonary oligaemia are another classic finding in , as is the pulmonary bay sign.

Tet spells may be treated with beta-blockers such as propranolol, but acute episodes require rapid intervention with morphine or intranasal fentanyl to reduce ventilatory drive, a vasopressor such as phenylephrine, or norepinephrine to increase systemic vascular resistance, and IV fluids for volume expansion.

Oxygen (100%) may be effective in treating spells because it is a potent pulmonary vasodilator and systemic vasoconstrictor. This allows more blood flow to the lungs by decreasing shunting of deoxygenated blood from the right to left ventricle through the VSD. There are also simple procedures such as squatting and the knee chest position which increase systemic vascular resistance and decrease right-to-left shunting of deoxygenated blood into the systemic circulation.

The condition was initially thought untreatable until surgeon Alfred Blalock, cardiologist Helen B. Taussig, and lab assistant Vivien Thomas at Johns Hopkins University developed a palliative surgical procedure, which involved forming a side to end anastomosis between the subclavian artery and the pulmonary artery. This first surgery was depicted in the film Something the Lord Made. It was actually Helen Taussig who convinced Alfred Blalock that the shunt was going to work. This redirected a large portion of the partially oxygenated blood leaving the heart for the body into the lungs, increasing flow through the pulmonary circuit, and greatly relieving symptoms in patients. The first Blalock-Thomas-Taussig shunt surgery was performed on 15-month-old Eileen Saxon on November 29, 1944, with dramatic results.

The Potts shunt and the Waterston-Cooley shunt are other shunt procedures which were developed for the same purpose. These are no longer used. Currently, Blalock-Thomas-Taussig shunts are not normally performed on infants with TOF except for severe variants such as TOF with pulmonary atresia (pseudotruncus arteriosus).

The Blalock-Thomas-Taussig procedure, initially the only surgical treatment available for tetralogy of Fallot, was palliative but not curative. The first total repair of tetralogy of Fallot was done by a team led by C. Walton Lillehei at the University of Minnesota in 1954 on an 11-year-old boy. Total repair on infants has had success from 1981, with research indicating that it has a comparatively low mortality rate.

Total repair of tetralogy of Fallot initially carried a high mortality risk, but this risk has gone down steadily over the years. Surgery is now often carried out in infants one year of age or younger with less than 5% perioperative mortality. The open-heart surgery is designed to relieve the right ventricular outflow tract stenosis by careful resection of muscle and to repair the VSD with a Gore-Tex patch or a homograft. Additional reparative or reconstructive surgery may be done on patients as required by their particular cardiac anatomy.

Tetralogy of Fallot occurs approximately 400 times per million live births and accounts for 7 to 10% of all congenital heart abnormalities.

Untreated, tetralogy of Fallot rapidly results in progressive right ventricular hypertrophy due to the increased resistance caused by narrowing of the pulmonary trunk. This progresses to heart failure which begins in the right ventricle and often leads to left heart failure and dilated cardiomyopathy. Mortality rate depends on the severity of the tetralogy of Fallot. If left untreated, TOF carries a 35% mortality rate in the first year of life, and a 50% mortality rate in the first three years of life. Untreated TOF also causes delayed growth and development, including delayed puberty.

Patients who have undergone total surgical repair of tetralogy of Fallot have improved hemodynamics and often have good to excellent cardiac function after the operation with some to no exercise intolerance (New York Heart Association Class I-II). Surgical success and long-term outcome greatly depend on the particular anatomy of the patient and the surgeon’s skill and experience with this type of repair.

Ninety percent of people with total repair as babies develop a progressively leaky pulmonary valve later in life. It is recommended that they follow up at a specialized adult congenital heart disease center.