An enlargement of the aorta may occur; an increased risk of abnormality is seen in babies of women taking lithium during the first trimester of pregnancy (though some have questioned this) and in those with Wolff-Parkinson-White syndrome. 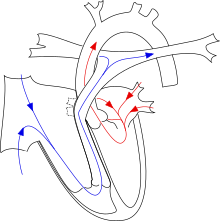 A diagram showing the downward displacement of the tricuspid valve from its normal position in the fibrous ring down into the right ventricle.

While Ebstein’s anomaly is defined as the congenital displacement of the tricuspid valve towards the apex of the right ventricle, it is often associated with other abnormalities.

Typically, anatomic abnormalities of the tricuspid valve exist, with enlargement of the anterior leaflet of the valve. The other leaflets are described as being plastered to the endocardium.

About 50% of individuals with Ebstein’s anomaly have an associated shunt between the right and left atria, either an atrial septal defect or a patent foramen ovale.

About 50% of individuals with Ebstein’s anomaly have evidence of Wolff-Parkinson-White syndrome, secondary to the right ventricular tissue.

A 10-lead ECG of a woman with Ebstein’s anomaly: The ECG shows signs of right atrial enlargement, best seen in V1. Other P waves are broad and tall, these are termed “Himalayan” P waves. Also, a right bundle-branch block pattern and a first-degree atrioventricular block (prolonged PR-interval) due to intra-atrial conduction delay are seen. No evidence of a Kent-bundle is seen in this patient. The T wave inversion in V1-4 and a marked Q wave in III occur; these changes are characteristic for Ebstein’s anomaly and do not reflect ischemic ECG changes in this patient.

Other abnormalities that can be seen on the ECG include:

Ebstein’s typically presents as an (antidromic) AV reentrant tachycardia with associated pre-excitation. In this setting, the preferred medication treatment agent is procainamide. Since AV-blockade may promote conduction over the accessory pathway, drugs such as beta blockers, calcium channel blockers, and digoxin are contraindicated.

If atrial fibrillation with pre-excitation occurs, treatment options include procainamide, flecainide, propafenone, dofetilide, and ibutilide, since these medications slow conduction in the accessory pathway causing the tachycardia and should be administered before considering electrical cardioversion. Intravenous amiodarone may also convert atrial fibrillation and/or slow the ventricular response.

The CCS further recommends patients who require o an operation for Ebstein’s anomaly should be operated on by congenital heart surgeons who have substantial specific experience and success with this operation. Every effort should be made to preserve the native tricuspid valve.